I recently purchased Stephen Kekule’s piece Box Kite as a gift for my partner. Buying art for a loved one can be tricky (I’ve watched many entertaining debates among couples in the gallery). But I went out on a limb and fortunately, nailed it; he loves the piece to bits.

A short while later, we received a large envelope in the mail from Stephen Kekule. It was a thank you letter along with some information regarding the piece. We were already in awe of Stephen’s delicate work, but having this backstory certainly deepened our appreciation for his process.

Stephen Kekule’s Letter ( AKA The Making of Box Kite):

I was watching an episode of the Vancouver, BC filmed, The Killing. An image shown on the screen. It was a transition shot before the story moved onto the next scene. Brief as it was, it captured my attention. It took me a moment to realize the impact; by then, the story had continued and I had to stop and reverse back to it.

I like the severity of the counterbalance between substance and space, detail and void. I created a work, High-Rise, which explored those contrasts. It was during that work when I was inspired to begin Box Kite.

For this painting, I made a section of a building using Lego pieces as a model. I took a photo after positioning and illuminating it in a manner I felt was interesting. I cropped the picture severely, keeping only the bare minimum to suggest a high-rise then added a balancing amount of space.

When considering what to do in the airspace, I thought of many possibilities: birds in flight, balloons, even someone launching a paper airplane; I experimented with sky lanterns rising into the beyond. I liked the bubbles and sky lanterns moving away and up into the air, that is what led to thinking about kites. When I thought of a box kite—Eureka! It seemed the perfect compliment to the building’s geometry. I spent some time experimenting with placement and orientation of the kite before I found the “proper” position. Adding in a child and a delicate arc of string tied the whole thing together.

In order for me to properly draw something, it helps to understand its structure. For the box kite, I wanted to know how it was made so I did some research. I came upon the NASA website which provides a valuable diagram with identified parts. (I modified my kite, because it doesn’t have to fly and only has to look good.) Also available was some scientific information. I wasn’t looking for nor expecting to find physics equations. They were superfluous for my needs, but I was impressed with the elegant math.

After reading Stephen’s letter, I was reminded of how much work goes into every single piece that hangs on the gallery’s walls. It’s easy to forget. The RSG has a constantly fluctuating inventory of more than 1,500 pieces. We hang salon style, floor to ceiling, so I’m used to seeing twenty pieces at once. It’s a beautiful blur of things flying in and out the door. But Stephen’s letter gave me pause, for which I am truly grateful. 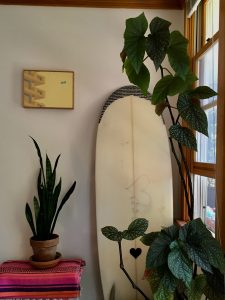 Box Kite now lives happily ever after next to my partner’s surf board. He says surfing feels like flying, which makes his surf board, much like a box kite, his own little flying machine.